For those of you who wanted to lust over a more affordable vehicle, this one is for you.

This two-seater carbon-fiber sports car is powered under the hood by a specially tuned six-cylinder mid-engine which kicks out 330 horsepower and 273 foot-pounds of torque at 4750 rpm. This rear-wheeled Porsche weighs in at 2855 pounds thus making it 121 pounds lighter than the Cayman S. 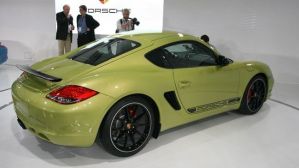 Side view of Cayman R

With its lighter weight, beefed up engine and PDK double-clutch automatic transmission this Cayman has a top speed of 175 mph and can zip from zero to 60 mph in 4.7 seconds. 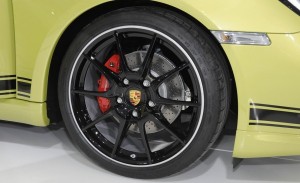 Sitting on 19 inch wheels, this Cayman's ride height has been lowered by 20 millimeters